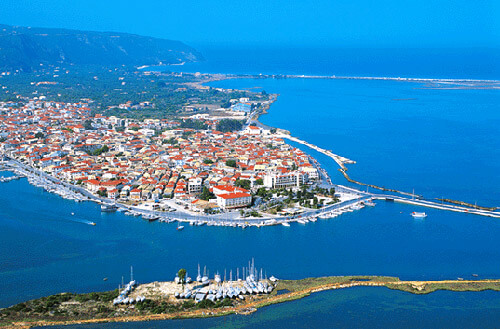 Lefkada, also known as Lefkas, is one of the Ionian Islands, located on the west coast of Greece. Proud for its beautiful, award-winning beaches (8 blue flag awards for 2016), known for its cultural contribution (also called “homeland of poets”) combines the blue of the sea with the green of the nature, the physical, intellectual and the spiritual pleasures, making it an ideal destination for Greek and foreign visitors.

The island is connected to the mainland by a floating bridge making it very accessible, all year long. Its distance from Athens is 360 km and from Thessaloniki 380. Furthermore the Aktion International Airport is located in less than 20 kilometers providing connection with many European cities. Last but not least Lefkada can also be accessed by boat. It is worth mentioning that the island’s marina (Lefkas Marina) is one of the of the most modern marinas of the Mediterranean (Blue flag award, 2016) with a total capacity is 620 yachts.

Using public transportation, you can visit Lefkada, from almost every big city of Greece, most of them providing daily bus routes during summer. Moreover the island can also be accessed by seaplanes which have daily flight from close destinations, such as Corfu and Patra.

How to visit our studios

Once you have crossed the metal floating bridge you stand in the land of Lefkada. You are just about 30’ from Kalamitsi. After the bridge you should turn left and follow the causeway that leads to a second bridge (this time a concrete one). After the bridge you turn left again and continue to the center of the town which is about 1 km. In the middle of that distance you’ll come across a roundabout which you just cross without turning anywhere. You now approach Agios Minas square (the heart of the city and the spot with the most traffic). In this intersection you turn left (signs to Agios Nikitas/Kathisma) and you come across a crossroad. Those two roads lead either to the west or the east side of the island. In order to get to Kalamitsi you follow the right road and the hardest part is over!

Driving south you will pass over the villages: Apolpaina, Tsoukalades, Agios Nikitas, Kathisma beach and then you’ll find Kalamitsi. The village’s streets do not have names but it is very easy to find the apartments. Due to the road’s small width here, it is necessary to be a bit careful. Once you enter the village, in about 100 meters there is a crossroad that leads southern to the island. You just continue straight ahead and turn right on the second road you see (there is the village’s old school and a playground there). On this road on the left you'll find the apartments.

We should also mention that after Kathisma beach intersections you will come across a lot of yellow-colored signs that will quide you to Ermis Studios.

You can get directions to Studios Ermis, by visiting Google Maps.